Datatalk.asia pushes for data journalism to battle against public lies 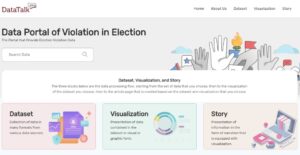 The director of Philippine Center for Investigative Journalism (PCIJ) Carmela Fonbuena said she could not emphasize enough just how important data journalism was in safeguarding Southeast Asian elections from politicians’ lies to ensure their transparency.

“Data journalism can also aid the public in a bid to get to know the candidates better, starting from their backgrounds, affiliations and campaign budgets,” Fonbuena said during the virtual launch of the Datatalk.asia platform organized by the Indonesian Association for Media Development (PPMN) on Thursday, Jan. 28.

Why has the data on campaign budgets become essential during the elections? “The candidates who spend the biggest amount of money during the campaign trail are usually the most memorable ones,” she said.

Fonbuena said that electoral transparency became a relevant issue to the Philippines taking into account the fact that in 2022, the country would organize its general elections, involving about 61.8 million voters. With the enormous number of voters involved, Fonbuena believed journalists could transfer valuable knowledge to these voters to help them exercise their rights properly. Fonbuena said she also hoped the platform could serve as a platform for journalists across various Asia Pacific regions to collectively learn about how big data or data could also help journalistic storytelling. “Data could be a journalistic weapon to combat widespread lies,” she said.

Datatalk.asia is a portal which features open data regarding Southeast Asian elections, especially data on voters list, electoral results and violations in three countries: Indonesia, Malaysia and the Philippines. The website was developed by the PPMN in collaboration with the Association for Elections and Democracy through the Asia-Pacific Regional Support for Elections and Political Transitions (RESPECT) program. PPMN also works together with PCIJ and the Sinar Project Malaysia for this cross-national project.

The Sinar Project Malaysia Coordinator Khairil Yusof said he agreed with Fonbuena’s opinions; he believed the cross-national collaboration epitomized by Datatalk.asia was extremely important. Thanks to the platform, electoral data available in each country can be utilized not only for electoral management purposes but also for post-electoral analyses, according to Yusof.

“The data which is available in each country can be used not only to monitor the elections but also to analyze post-electoral trends,” he said.

In Malaysia, for instance, at least only 40 percent of all electoral candidates have their identities known by the public. This is because the Malaysian electoral process only takes two weeks from the candidacy to the voting day, thus making proper monitoring and watchdogging by journalists through their journalistic reports hard to come by.“Our core principle in monitoring the Southeast Asian elections is: never trust any politicians. When any politicians claim something, you always have to verify it,” Khairil said.

Despite the challenges, journalists in Southeast Asia admitted that it was not easy for them to collect public data related to the elections. The Philippines is one among very few countries which do not have any public data transparency laws. Indonesia, meanwhile, can be considered more fortunate in this manner because it has the Law No. 14/2008 on Public Information Openness.

Association for the Elections and Democracy Director Khairunnisa Nur Agustiyati, meanwhile, conveyed several obstacles which often hamper the journalists’ (and the public-at-large’s) attempts to access public data, one of them being legal basis. All this time, she said, elections organizers, be they part of the central or regional government, did not feel as if they were mandated to provide access to these data to the public.

“The organizers still perceive themselves to be the owners of the data, instead of the providers of the data. Therefore, they don’t consider giving open access to the data as part of a public service,” she said.

The commitment toward elections data transparency has oftentimes also been affected by the decisions of each elections body commissioner.

“When different commissioners takes the office, they oftentimes prioritize different things, requiring us to start from scratch again in a bid for data transparency,” she said. The condition, according to Khairunnisa, becomes more complicated when neither the political parties nor the candidates want their backgrounds to be known by the public.

“We support Datatalk.asia by supplying data to the platform. We have also prepared some data which could readily be accessed by journalists, thus helping the journalists understand electoral violations, all the while supporting democracy,” said Fritz.

PPMN Program Deputy Fransisca Ria Susanti said that the open data stored in Datatalk.asia platform was relatively easy to use. Users could benefit from various data in easy-to-process formats, such as the Comma Separated Values (CSV) and JavaScript Object Notation (Json). Hence users can directly analyze and convert datasets into infographics format through available features in Datatalk.asia.

Fransisca also convinced journalists that the website could add value to their journalistic products. “In the information disruption era, information can spread rapidly, while not all of them are valid. Therefore, journalisms which base themselves on in-depth analysis are deeply important. The Datatalk.asia could aid journalists in their attempts to craft high-quality products,” she said.

Meanwhile, RESPECT Chief of Party Theresia Joice Damayanti stated that the Datatalk.asia portal launch had marked an initial step in a collective commitment to build a better democracy in Asia. Theresia said she hoped the website, which contained various elections-related datasets, could also boost public literacy on the general elections.

“We want to provide the public access to credible and relevant data related to the elections,” Theresia said during the platform launching event on Thursday, Jan. 28. Theresia also conveyed her gratitude to all partners who had already supported the development of the Datatalk.asia website, including the General Elections Commission and the Bawaslu. She would also like to thank the support of Americans in this collective endeavor to boost democratization in Asia through the United States Agency for International Development (USAID).

“The collaborative consortium works together to supply datasets to this portal. The organization curates data and seeks to find ways to disseminate the data,” Theresia said.

Data-N Malaysia founder Kuek Ser Kuang Keng also responded positively to the launching of the Datatalk.asia portal. According to him, the portal can be developed further so it can also provide data beyond the elections-related ones to aid journalists in their works. The Datatalk.asia website can be a platform which can be developed and used collaboratively, not only by journalists.

“I hope the Datatalk.asia platform can serve functions beyond presenting elections-related data to also provide analysis on how media outlets/journalists are reporting on certain issues. Journalists should not work only among themselves, but also forge collaborations with scholars,” he said.

Keng, who works as a data journalism consultant, also pointed out to how several media outlets across different countries had also initiated platforms based on big data to power their journalistic works. One website which makes use of big data is nabuscadocandidato.com.br, a Brazilian platform which currently processes raw data into trivia quizzes.

“The quizzes can be an easy way to help readers judge whether the candidates they support are worth supporting or not. Therefore, it’s important to only learn about their backgrounds but also the policies they propose,” Keng said.

Initiatives which provide open data regarding the elections have also sprouted in several other countries. In Spain, for instance, the No Bote el Voto (Don’t Botch your Vote) website transparently reveals candidate track record data.

Meanwhile, in Taiwan, the website readr.tw presents information about the duration in which the incumbents have occupied parliamentary seats. Other than that, the platform also provides information about the familial ties between one candidate and another, as well as where they source their campaign budgets. At the same time, the website also helps the public understand how the candidates manage their campaign funds through a game.

MalaysiaKini also uses the same approach to public education through newslab.malaysiakini.com. According to Kuek, voters can play a game called Spend Like an MP: “where you can decide how you’d like to spend the campaign funds you hold and how much money you’d like to use to win the elections,” Keng said.

With big data, Keng believed, journalists could also serve as partners for the software developers, IT researchers and data scientists to process data which could uphold democracy. Together, they can work to use big data to supervise the entire voting and new administration inauguration processes. “Lots of great initiatives have emerged in this realm, including Datatalk.asia,” Keng said. (Damar Fery Ardiyan)